For more than 25 years, the principal goal of the Foundation's philanthropy in Israel has been building a shared society that welcomes the full and equal participation of both Jewish and Arab citizens. The Declaration of Establishment of the State of Israel declares: "THE STATE OF ISRAEL will be open for Jewish immigration and for the Ingathering of the Exiles; it will foster the development of the country for the benefit of all its inhabitants; it will be based on freedom, justice and peace as envisaged by the prophets of Israel; it will ensure complete equality of social and political rights to all its inhabitants irrespective of religion, race or sex; it will guarantee freedom of religion, conscience, language, education and culture; it will safeguard the Holy Places of all religions; and it will be faithful to the principles of the Charter of the United Nations."

In choosing this focus, the Foundation was guided by a key 2003 report of the Government of Israel: "The Arab sector: The committee determined that this is the most sensitive and important domestic issue facing Israel today. As such, it requires the personal involvement and leadership of the prime minister. The committee determined that the issue has been neglected for many years, and demanded that immediate, medium term, and long-term action be taken. The committee determined that action must be focused on giving true equality to the country's Arab citizens. Israel's Arab citizens have the right to equality because of the essence of the State of Israel as a democracy, and because it is a basic right of every citizen. The state must work to wipe out the stain of discrimination against its Arab citizens, in its various forms and expressions" (The Official Summation of the Or Commission Report, English Translation Published by Haaretz, September 2, 2003).

Within the overall context of building shared society, the Foundation primarily focuses on the development of integrated, bilingual public education for Jewish and Arab children in Israel. The Foundation believes that this emphasis is essential to address the root cause of the continuing divisions between the diverse communities that comprise Israeli society. The fundamental role of education has been recognized both by the Government of Israel and by respected academic experts: "the fact that Israel has separate education systems is the primary catalyst for rooted prejudice to the 'other' ... and a central cause of hostility between different population groups and . . . societal fragmentation" (Prof. Mordechai Kremnitzer, Israel Democracy Institute, 2016); "Separation from the age of preschool through to the end of Grade 12 prevents the groups from getting acquainted with each other and strengthens the social alienation and suspicions toward the other or those that are different ... it is difficult to exaggerate the importance of education and its pivotal position in the education system in eradicating hatred and racism" ("Education for a Shared Society and Prevention of Racism," State Comptroller Report, 2016).

The Foundation's most important single grantee in the effort to address the education system's barriers to creating shared society is Hand in Hand: Center for Jewish-Arab Education in Israel. With nearly 2000 students in 6 locations across Israel, and significant growth continuing each year, Hand in Hand has developed a successful organizational and pedagogical model with the potential for nationwide implementation and impact. As stated by a leading Israeli newspaper: "The educational model developed by Hand in Hand screams for much greater support.... Now is the time to replicate it throughout the country...." ("A Worthy Response To Racist Pyromaniacs," Haaretz, December 2, 2014).

See below for current Shared Society in Israel grantees. 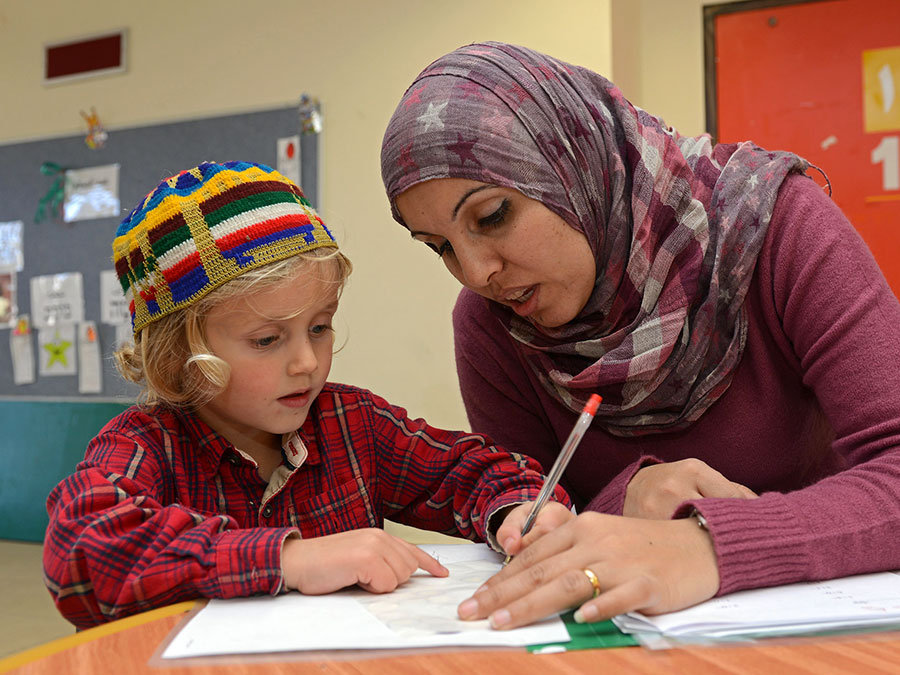 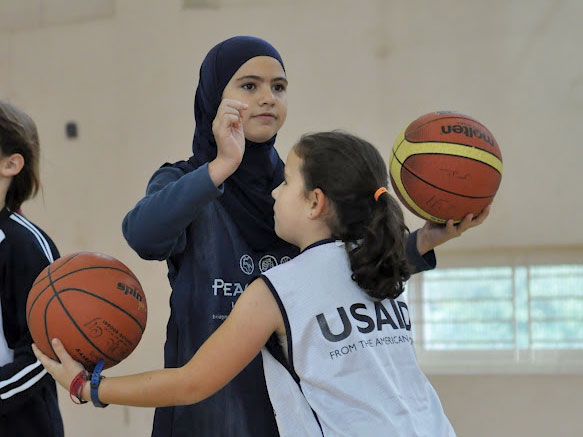 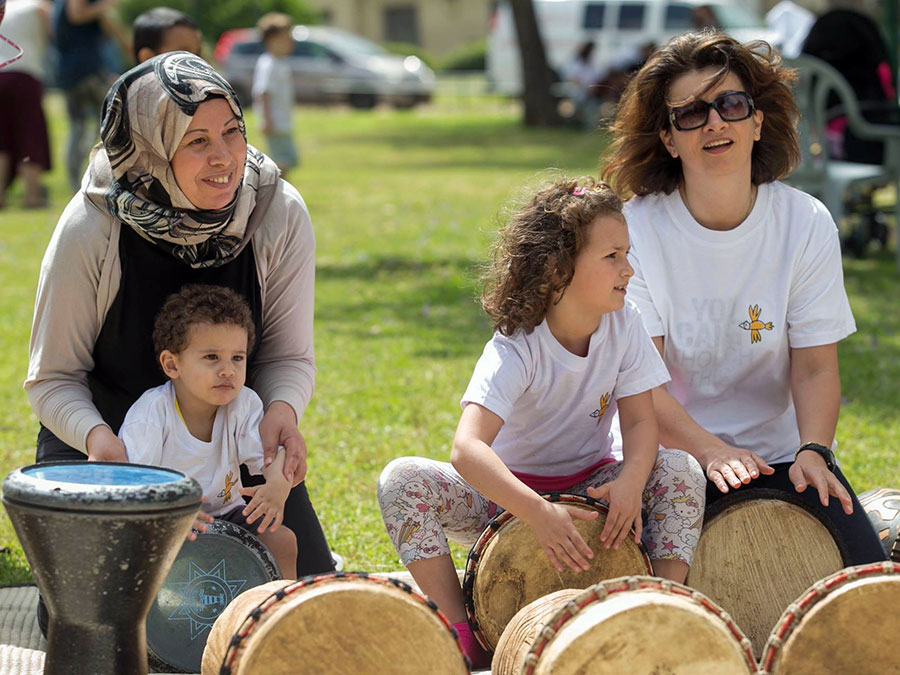 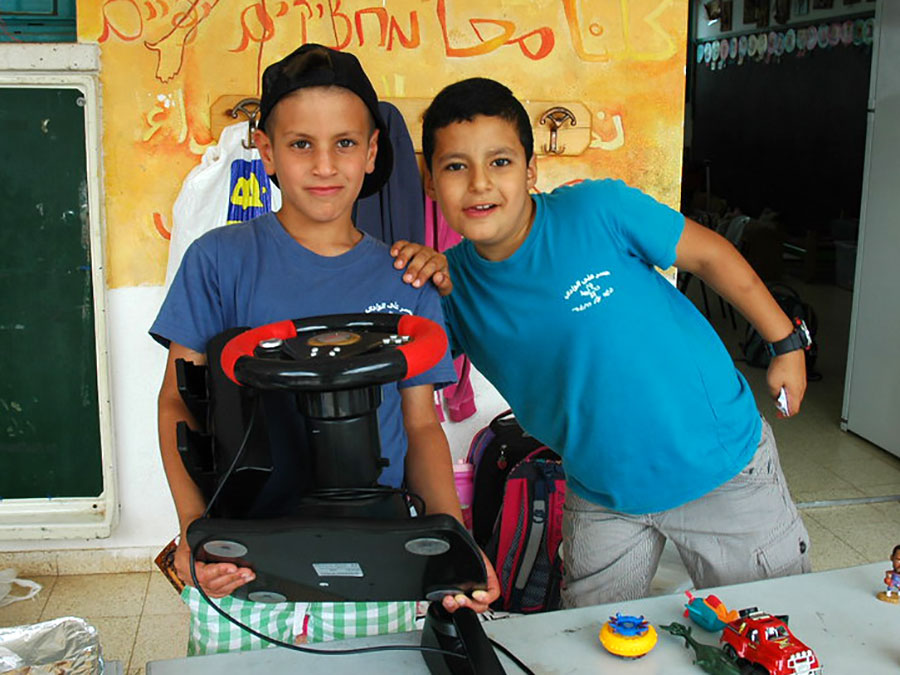 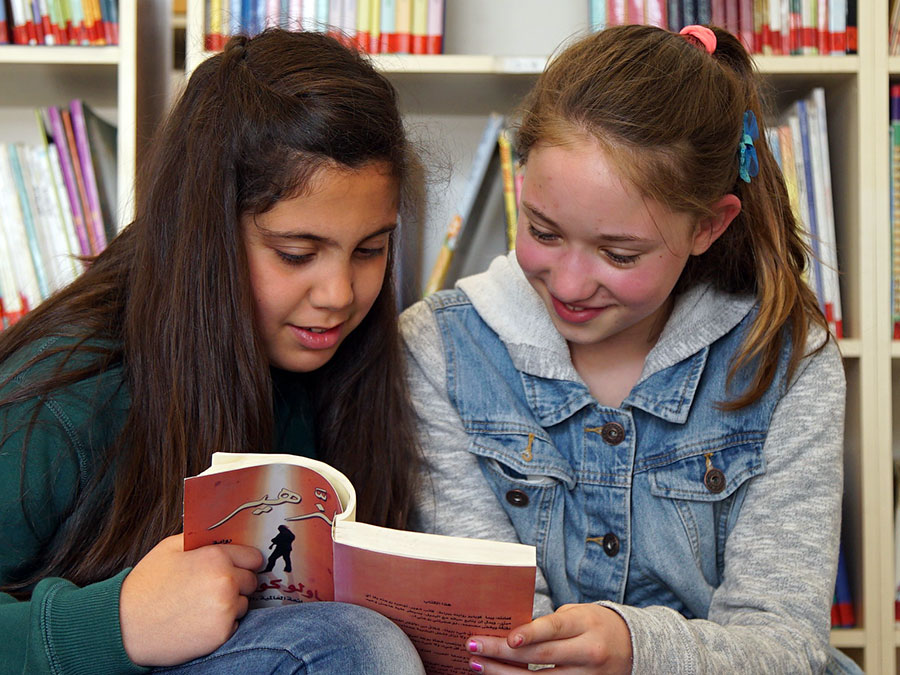 The Abraham Initiatives aims to create widespread positive social change in the field of Jewish-Arab relations in Israel by stimulating policy change in both national and local government, as well as state institutions and other key areas in Israeli society.

The Alliance for Middle East Peace is a coalition of non-governmental organizations that promote people-to-people coexistence and reconciliation between Israelis and Palestinians, Arabs and Jews in the Middle East.

Givat Haviva Center for Shared Society works to empower the Arab minority as a key to creating a more peaceful and tolerant society and brings Arab and Jewish youth together for co-existence programs.

Hagar: Jewish-Arab Education for Equality is dedicated to creating a shared space for Jewish and Arab residents of the Negev - a space based on the foundations of multiculturalism, bilingualism and equality. Through the establishment of bilingual, integrated schools and a vibrant shared community, Hagar provides sustainable alternatives for civic engagement, education and pedagogy, which bring hope for a more peaceful future in the Negev.

HaMoked: Center for Defence of the Individual

HaMoked: Center for Defence of the Individual works to assist Palestinian residents of the Occupied Territories whose rights are violated due to Israeli policies.

Hand in Hand: Center for Jewish-Arab Education in Israel

Hand in Hand is building integration and equality in Israel through a growing network of Jewish-Arab public schools and shared communities. In six locations across the country, thousands of Arab and Jewish students, teachers, and families come together every day in multicultural, bilingual classrooms, and integrated communities.

Have You Seen the Horizon Lately?

"Have You Seen the Horizon Lately?” is an Israeli initiative that promotes Jewish-Arab political partnership.

The mission of Injaz is to assist Arab municipalities in building strong, effective and professional systems and sustainable infrastructures that position the municipalities to pro-actively advance their economic interests and service delivery, and thereby improve the lives of residents.

The Israel Religious Action Center (IRAC) is the leading civil and human rights organization addressing issues of religion and state in Israel.

J Street organizes and mobilizes pro-Israel, pro-peace Americans who want Israel to be secure, democratic and the national home of the Jewish people. It works in American politics and the Jewish community to advocate policies that advance shared US and Israeli interests as well as Jewish and democratic values, leading to a two-state solution to the Israeli-Palestinian conflict.

The National Committee for Arab Local Councils in Israel (NCALC) unites and represents all Arab local authorities and municipalities in Israel.

Neve Shalom Wahat al-Salam's Primary School is a pioneering educational system that provides bilingual and multicultural schooling to children from WAS-NS and the surrounding area.

New Israel Fund aims to advance liberal democracy, including freedom of speech and minority rights, and to fight the inequality, injustice and extremism that diminish Israel.

The Parents Circle – Families Forum (PCFF) is a joint Israeli-Palestinian organization of over 600 families, all of whom have lost an immediate family member to the ongoing conflict.

The Foundation supports scholarships for Arab students to attend culinary school in France.

Q Schools: Association for Promoting Education in the Arab Society

Q Schools is a continuous system of education that includes preschools for ages 3-5, after-school programs for ages 5-18, complementary enrichment programs conducted in public schools, and a youth leadership center for ages 12 to 21.

The Regional Organization for Peace, Economics & Security (ROPES) is a new nonprofit organization that seeks to revive momentum toward a historic Israeli-Palestinian peace accord. Inspired by the Arab Peace Initiative, ROPES works to assemble a socially cohesive tribe of forward-thinking Millennial leaders from across the Middle East, united by a 2030 vision of an integrated post-conflict region.

Shomrim - The Center for Media and Democracy

The Center for Media and Democracy in Israel, Shomrim (the Guardians) is a nonprofit and non-partisan independent news organization.

Sikkuy-Aufoq For a Shared and Equal Society

Sikkuy-Aufoq is a shared organization of Jewish and Arab citizens, working to implement full equality on all levels between Arab and Jewish citizens of Israel.

The Social Venture Fund for Jewish-Arab Equality and Shared Society (SVF) is a philanthropic collaborative that brings together individuals, foundations, and federations that support an equal and inclusive shared society in Israel for the benefit of all of its citizens.

Tag Meir resolves to connect different groups in Israeli society in the battle to eradicate racism and violence in Israel.

The Taub Center is a non-partisan socioeconomic research institute that develops innovative research and policy options to advance the well-being of Israelis.

Yesh Din is an all volunteer organization that works to bring about meaningful change and concrete improvement in the human rights situation and law enforcement in the Occupied Palestinian Territories.